Bravo Team, an immersive, first-person cover shooter built for co-op, is out now for PlayStation VR! Check out the immersion trailer below:

Take aim. Strike first – strike hard. It’s all or nothing in a heart-pumping firefight of intense combat and split-second tactical decision making.

Trapped in hostile territory, you and your teammate are totally surrounded. Only cool thinking in the heat of battle will see you through to the end of your mission – so take up variety of shotguns, pistols and automatic weapons, duck into cover and make every shot count.

Want to know more about Bravo Team? Read on..

Bravo Team is a first person VR cover shooter set in a fictional, modern day city in Eastern Europe. When your escort mission goes wrong it’s up to you and a friend to survive as the city is thrown into turmoil. You’ll need to think on your feet and work together as you battle through an intense journey of close calls and chaotic firefights.

Teamwork is vital to your survival and Bravo Team has been developed for both single player and two player co-op online. Our levels and enemies are designed to test your ability to work as a team. Calling targets, covering fire and constant communication are the difference between success and failure.

We’ve gone to tremendous lengths with Bravo Team to put you inside the firefight. With only a shred of cover between you and certain death, RPGs fly overhead and bullets impact just inches from your face to put you right in the middle of a warzone. Our arsenal of lethal weaponry gives you the tools you need to tackle these threats with a variety of powerful, tactile firearms.

Getting our hands on the Aim controller was an enormous inspiration for this. Supermassive Games has always enjoyed designing and building around the best features of great new controllers – and the Aim is no exception. Feeling that you are actually holding and interacting with the weapons in Bravo Team is incredibly exciting to us and elevates the experience to an entirely new level.

Bravo Team demands that you interact with your weapon and environment in natural, tactile ways. To lean around cover simply lean left or right. To aim your weapon, just raise the controller and line up the iron sights as you would in reality. Pinned down by enemy fire? Lift the controller above your head and blind fire away. Each action is performed naturally and intuitively, just like in real life.

This sense of ‘being there’ is an enormous focus for us. Not only is the feel of battle key, we believe the sense of place and presence that comes from a seamless experience is incredibly important. From beginning to end you will fight through the streets and buildings without any loading or level select screens interrupting your immersive VR experience.

Bravo Team will thrust you into the chaos of an action movie firefight. With the Aim controller in your hands and a trusted teammate watching your six, you’ll make split second decisions in a fight for survival that spans the length and breadth of a city in turmoil. 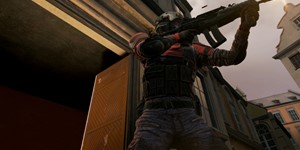 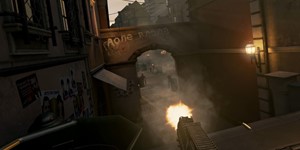